My friend and I went birdwatching on Thursday morning. It was a real treat as she felt comfortable enough to have me ride along in her car. We went to the 68th Street Wetlands and I was so unprepared for a summer outing. I got a touch of sunburn because I couldn’t find the sunscreen. I also forgot the camera battery on the charger, so I only have cell phone pics to share. Fortunately, I didn’t pack the big lens, whew. I would have needed the big lens to get decent bird pictures though.

Calgary’s Southeast, somewhat like the Northeast, is a weirdsville zone. The community of Forest Lawn used to be it’s own town and was incorporated into Calgary in 1961. There’s a wide avenue, 17th Avenue SE, that was essentially Forest Lawn’s main street. There’s a mish mash of old and new and industrial. The wetlands are bordered by Elliston Park, new condos and the East Calgary landfill. My friend said that if the wind was blowing the right way, we would smell the dump, but as every birder knows, dumps are great places to spot birds!

Part of the pathway around the wetlands is paved and the rest is a gravel access road around the dump’s storm ponds for those who want to go off-trail. We saw a stunning amount of birds in the 3km walk that took us about three hours. The trick is standing in place long enough for the birds to appear :-)

We saw 42 different species and many of them were lifers for me:

Here's what I saw--I had to wait on the gadwall ID. Unfortunately it wasn't my day to take photos--most of them weren't worth showing off, but they are keepers for IDs at least!

And here's the lovely storm pond on a beautiful Alberta day: 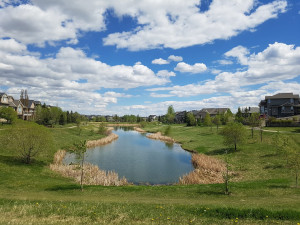 I went birdwatching last week and had a lot of fun. There's a ravine and two storm ponds near where I live that make a 3.4km loop. Trees and water? You'll find birds aplenty!

It was so enjoyable to spend time outdoors after spending too much time indoors. The day was overcast and I only took my binoculars.

Do you have a birdbath? 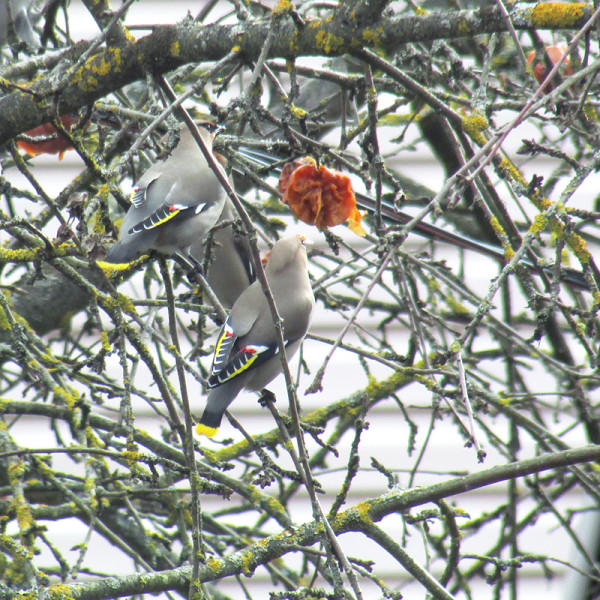 You wouldn't know it's spring around here! We had two days of snow fall after a few days of nice weather. I had two good walks on the weekend and saw the usual suspects for my part of the world--crows, sparrows, Canada geese, starlings, magpies, house finches--but I did see my first robin of spring! That was quite exciting. I also spotted the return of one of our resident raptors. I think it's a sharp shinned hawk, but it was so fast. The only way I knew about was the distinctive eee eee eee call.

Today I was shovelling the snow for ourselves and our neighbours when I noticed the magpies making a fuss. This time I could confirm it was a sharp shinned hawk as it was close by and didn't move. The magpies were trying to shoo it away but they lost their daring after a while. A second hawk joined the first and out of nowhere came a crow!

I'm working from home now so I'm more excited about getting up early to birdwatch than take the bus :-)

I was going to make this post when I had gone through and edited my photos from a birdwatching trip my friend and I went on last fall. Sadly, most of my pictures were duds! The autumn sunset was in the wrong direction and created a lot of harsh glare. My lens didn't have enough reach, hence my purchase of the fancy Tamron lens, which I have yet to unpack! I'll share what I can though.

This was my first visit to Beaver Dam Flats in Southeast Calgary, Alberta, Canada. It's a 43 hectare park on the Bow River with manmade pathways and human made trails. I would love to visit in the spring or summer, but I would not go alone. We saw signs of homeless habitation and there was a used campfire with logs around it.

It felt like all seasons in a day which is not uncommon for Calgary. It was sunny, windy, icy and muddy. This was another reason I did not take a lot of photos as I had to walk very carefully in places.

Usually you can find lots of birds here, especially water fowl. The group was keen on spotting harlequin ducks that day and we did--although I could not see them. Bleh. I didn't pack binoculars. We saw Canada geese, mallards, goldeneyes and buffleheads. Apparently the gravel bar on the Bow River is a favourite spot for these guys. I didn't know that Canada geese fly all around during the day and then come back to the river to roost. We were just in time to see them land! We saw a lone cormorant too.

The woods were fairly quiet. We didn't even hear chickadees! I remarked to the group guide that one would think bird life would be more abundant here. Maybe it was just the luck of that day. Apparently this park was known as a great place to spot owls.

We walked down the winding path underneath a railroad bridge that was loaded with graffiti. Pam spotted a merlin who should have been on his way. I didn't know they were migratory birds.

In 2013, Calgary had a major flooding event and years later there are still places along the river that are fenced off. It was interested to see the debris piled up in person. Speaking of disasters, we finished the trip by taking a hike up a muddy, slippy slope that had me hanging on to the fence and wishing I had longer legs! There is a whole spot where a neighbourhood used to be and we walked right by it. High lead levels years after houses were constructed on an old oil processing site doomed the houses. The land will now become a park. Again, it was weird to see where houses should have been. We were on top of the ridge and afforded impressive views. By now it was getting late in the day. Mother Nature had one last surprise--bald eagles! WOW. They were so majestic and I couldn't believe that I was seeing them at such close range!

So some years ago, we put canes around the cup seed feeder to keep the pesky wood pigeons and feral pigeons from emptying it before the smaller birds could get a look in. This worked...

...until this year! At least one wood pigeon has worked out how to access the food!! I'm not sure it's worth all the wing flapping, but apparently it thinks so. Fortunately it doesn't clean it out, so the smaller birds still get a look in.

Today was biz biz! Mom and I were supposed to go on a birdwatching bus trip to Invermere, British Columbia for the Wings Over the Rockies bird festival. It was cancelled due to lack of interest, which is a shame. It was a gorgeous day today and it would have been beautiful weather. I rented a 100-400mm lens and we went to the Inglewood Bird Sanctuary instead here in Calgary, Alberta. We got there early and a good thing too because it became super hot by the time we left. I even got a sunburn!

We saw lots of birds including Canada geese, goslings, a variety of ducks, deer, robins, starlings, magpies and a bird of prey. I finally got a decent picture of a robin, which I am thrilled about. Here are some photos that I took with my phone off the camera screen. I'll add these to the pile of bird pictures I need to go through from February :-D 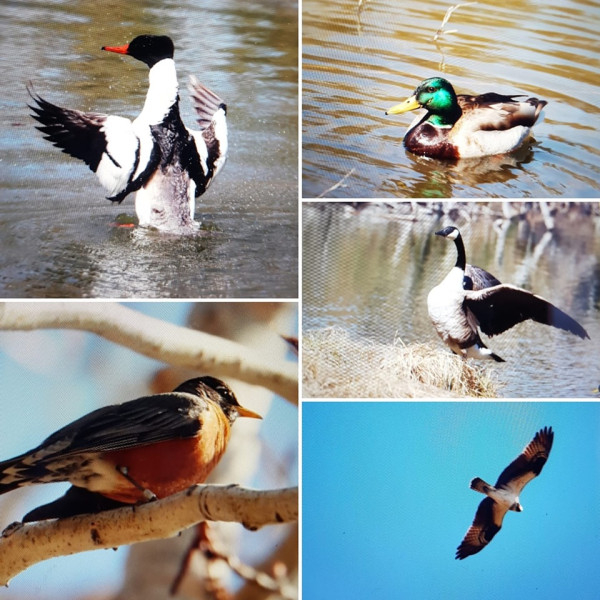 Spring is in full swing where I live. It's like a switch was turned on the first day of spring in March - Canada geese and ducks were suddenly in the park downtown, fierce winds pushed winter out and birds and squirrels and every other little thing took flight or came out of their hole.

The grey partridges are moseying about in their cute little ways. The sparrows are busy and the crows and magpies have returned. I wasn't sure if we would see the crows again after all their swooping antics last year. My co-worker, who is also a birder and hunter, theorized that the neighbourhood raptor might be a sharp shinned hawk.

As it's getting lighter and brighter in the mornings, I catch a lot of the dawn chorus on my way to work, which includes robins, house finches, sparrows and chickadees. We didn't get a lot of chickadees until the last few years. Anyhow, the hawk was out there on the rooftop adding his or her voice to the choir. It was backlit so I couldn't get a good look, but it definitely had a black cap which made me think it was a merlin. I listened to bird calls on All About Birds and it definitely sounds like a merlin. The calls are quite different.